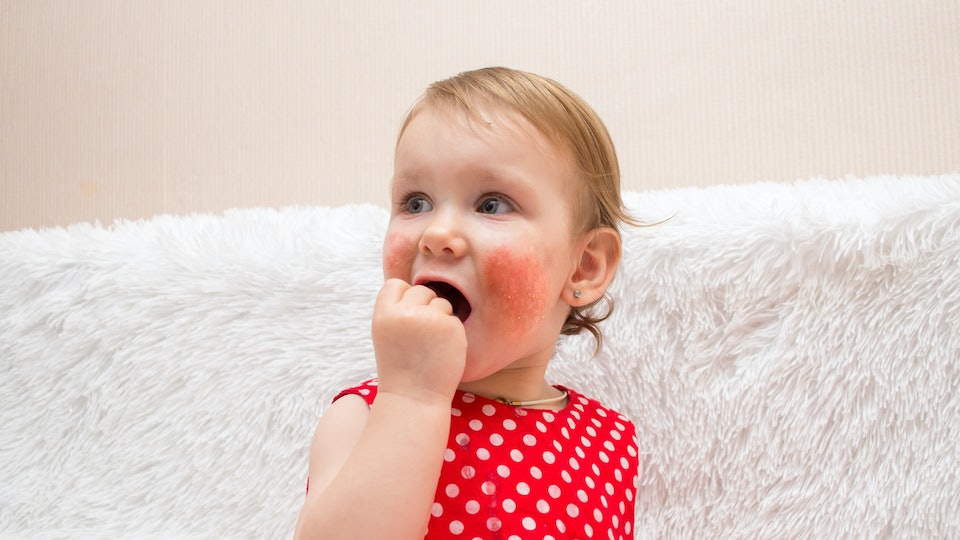 If you've ever had a child who suffered from eczema, you know what an incredibly frustrating condition it can be. Not only does it make little kids extremely itchy and uncomfortable, but the topical creams and ointments recommended by most pediatricians sometimes offer little to no relief. That's why some experts believe eczema should be treated from the inside out, which can include eliminating potential allergens from your kid's diet. But which foods can trigger eczema, and what can you do to prevent allergies to those foods from developing in the first place?

Historically, figuring out the cause of eczema has presented a huge challenge. (Is it that new laundry detergent? Or the family cat?). But studies have shown that eczema could be linked to an overgrowth of bad bacteria in the gut, which increases the risk of asthma and allergies (thereby explaining the connection between eczema and food), as pediatrician and best-selling author Dr. Tanya Altmann tells Romper. Why are researchers just beginning to figure this out now? And why do more and more kids seem to be suffering from eczema?

Modern medical practices that have led to a widespread imbalance of bacteria in the digestive system could be to blame, Dr. Altmann says.

"If you look at babies 100 years ago, they were born with the good bacteria and they got it from mom in the birthing process," but the chronic overuse of procedures and medications like C-sections and antibiotics means that moms have less beneficial bacteria in their systems now, "even if you do everything right," Dr. Altmann adds. Indeed, data shows that the gut microbiome of American babies is significantly different from both that of infants in their grandparents' generation and babies in other countries where the rate of C-sections and antibiotics usage are lower.

Disturbingly, researchers out of the University of California, Davis found that a large number of babies today are flat-out missing a key microbiome strain, B. infantis, as The Huffington Post reported, which protects the gut. Without B. infantis, the article continued, babies miss out on the necessary fatty acids in breastmilk because they can't digest specific oligosaccharides.

There is something you can do to help reverse this imbalance, however. As Dr. Altmann explains, giving your baby a high quality probiotic (she's a fan of Evivo which was created at The University of California Medical Center and is safe for newborns and infants) can result in an 80 percent decrease in the harmful pathogenic gut bacteria that leads to allergies, asthma and eczema.

If your baby has already developed eczema, probiotics will still help, but you might have to at least temporarily remove certain foods from her diet, too. How do you know which ones?

"It can get very confusing when you have young babies and eczema because it's never fun to draw blood and do all the tests," Dr. Altmann says. Additionally, false positives are common.

"What we often see is parents take their kids off too many things and then kids aren't getting enough good nutrition which makes eczema worse," she warns.

If you try removing foods, eliminate possible allergens for two to three weeks, as recommended by AskDrSears.com. If you see a major improvement, try re-introducing foods one at a time to figure out which is causing the allergy. As for which foods to start with, research shows that the following are among the most common culprits...Read more on Romper.com